We had fish and chips at Judges Bay on a glorious sunny evening, that even as it was happening – salty, gritty, beautiful – felt nostalgic in its golden light, the way perfect moments do.

“I love you a billion per cent,” my 6-year-old son said, in his wet togs as the shadows lengthened and the mozzies came out.

“I hate you. You’re the worst mum in the whole wide world.”

The most beautiful moments inevitably contain a heartbreaking sadness, an awareness of their own fragility.

On this day, on the other side of the world, our whole way of life was under attack.

The Guardian‘s Jonathan Freedland: “There can surely be no doubt now what we are up against. It is a murderous cult.”

When I read those words, I finally got it.

The jihadists who carried out the Charlie Hebdo massacre are not due the respect for members of a religion because they belong not to a religion, but to a cult.

After reading Freedland’s words I dug out the late Arthur Deikman’s definitive text on cult behavior The Wrong Way Home.

And yes, here we find the familiar hallmarks of a cult – rigid compliance with the group, dependence on a leader, devaluing the outsider and avoiding dissent.

Cults follow the ethical and moral standards of the group and the leader. These are framed as higher purposes, usually along the lines of saving the world. The cult shares a sense of special entitlement and devaluing the outsider is a necessary preliminary to harming others and doing violence.

There is no cruelty like the cruelty of the righteous. Deikman again: “Righteousness has a special vocabulary that establishes only two species of human beings, those who love the leader and those who hate him.”

Deikman posits that cults thrive not because people are crazy, but because they have two kinds of wishes: to have a meaningful life, to serve God or humanity; and the powerful desire to feel protected and secure (known in psychiatric terminology as dependency). This dependency dream impairs one’s ability to think realistically and to see reality.

People are widely held to have the right to attack what they dislike, but we have not reached the stage where we understand the reasons why we like or dislike: the process of devaluation and projection, to use the psychological terms.

Humans tend to see someone else as embodying the defects they deny in themselves. This projection of badness interferes with a realistic assessment of another’s intentions and frequently justifies violence.

How do you fight a cult? The natural response to the rigid pathology of a cult is to match it with our own unyielding authority, meeting one rigid cult with another sort of righteousness.

But Deikman suggests the answer is not in devaluing the enemy, stereotyping and self-righteousness. Instead, he argues Mahatma Gandhi’s principles of action, which served as a model for Martin Luther King, were the opposite of cult behaviour.

Gandhi stressed putting oneself in the place of the opponent, respecting his or her potential goodness and recognising that you may be in error.

Deikman calls for what he describes as an “eye-level” world, beginning with anti-authoritarian education and fostering autonomy which encourages the expression of multiple individual viewpoints and constructive disagreement.

Deikman says the price of cult behaviour is diminished realism and warns that with the problems facing the world – environmental catastrophe, spiralling populations – we cannot afford that now, if we ever could.

One way to remain in reality is through laughter; authority can only be laughed away, even if, as Private Eye editor Ian Hislop puts it, “very little seems funny today”.

Carl Jung saw the personal as political long before this became a trendy phrase.

“Individual self-knowledge and the capacity for human relationships which this brings is the only power strong enough to resist the collective dominance of the state.”

Zealots are dangerous because there is a deadness in their soul. To be human is to grapple with doubt.

As Graham Greene said: “When we are not sure, we are alive.” Reality may be uncomfortable and uncertain but its freedom is a bountiful reward, “rich in sunlight and without fear”.

Here is the story of a Mexican LC priest who was diagnosed by his superiors as Seriously Mentally Ill, hospitalized in a psychiatric ward and later shipped off to some strange destination -the Missions in Quintana Roo, Mexico?- to fend for himself. He was saved by his own instincts, the kindness of one confrere and the help of lay people, some very poor…

Read this brief testimony of cruelty and kindness 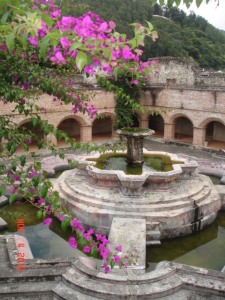 This is not a one of a kind phenomenon; there are reports of other similar cases. Where the heck did the superiors learn these inhumane procedures?